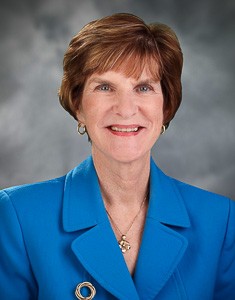 The Living Legend Award recognizes the outstanding achievements, in the areas of nursing excellence and visionary leadership, of an individual who fundamentally shapes the future of nursing, having a transformational impact across the Duke Health system and beyond. Prior to 2021, the award had been presented only twice.

Dr. Broome is a nationally recognized expert, scholar, and leader in pediatric nursing research and practice, as well as a highly regarded academic healthcare executive. She is a tireless champion for both nursing education and research, and the broader nursing profession, believing passionately in nursing’s ability to create positive change for nurses, their clients, and our world.

In her current role as Dean of the School of Nursing, Dr. Broome has led the school to the top of the U.S. News & World Report ranking in 2020 and 2021, to #8 in NIH funding and research in 2020, and multi-year recognition by the National League for Nursing Center of Excellence in Nursing Education. She also oversaw strategic investments for the Center for Community Health Improvement project, focused on improving population health in the Durham, N.C., area. Dr. Broome successfully completed a $46 million fundraising campaign, and partnered with the Duke University Health System to implement an award-winning professional development initiative for health system nurses, faculty, and nursing students.

As a scholar, Dr. Broome has served as a principal investigator on NIH-, industry- and foundation-funded research on pediatric pain, children’s engagement in research, and research ethics. She has also authored more than 120 papers in peer-reviewed journals and published seven books on a wide range of topics, including transformational nursing leadership.

For more than 18 years, Dr. Broome has served as Editor-in-Chief of Nursing Outlook, the official journal of the American Academy of Nursing (AAN). She is currently serving on the Council for the Advancement of Nursing Science, and on the Institute for Child Success and Nurse-Family Partnership Board of Directors. She has also served as a Board Member for the Commission for Nursing Education Accreditation and the Institute for Child Success.

Dr. Broome has announced her plans to step down as Dean of Duke University School of Nursing on June 30, 2021.